The church of San Michele

The church of San Michele

The church is found inside the boundaries and with its massive form to unique classroom, it strongly characterizes the aspect of the country. Held up by the Benedictine monks that possessed in the proximities an abbey and the church of San Maurizio has almost entirely been rebuilt in 1883 on a medieval building among the most ancient of the area.

It has four side altars and you is embellished by works in chalk representatives the Virtues. In comparison to the ancient gate of entry, for a long time demolished, it is found after all to the castle in an attractive piazzetta from which a splendid panorama enjoys him on the valley of the Metauro. The great portal in stone that decorates the entry of the church is surmounted by a coat of arms in sandstone. 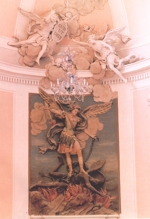 The only aisle is embellished from four altars of furred marbles and from a deep apse, visible to the outside also from great distance, busy to a large extent from a scene in chalk representing San Michele that kills the demon work of an unknown decorator.

Behind the greatest altar a precious small oil-cruet is found: decorated to the base from a winged head and in the eardrum from a Christ with open braccia, MCCCCLXXXV you is dated and signed "DO-FI" or Domenico Fiorentino, that is Domenico Rosselli (1439-1497/98).

The first altar of right preserve a pleasant shovel, recently restored, representing a Madonna of the Rosary with knelt the saints Domenico and Caterina, without the fifteen customary mysteries. You treats without doubt of the more interesting pictorial work of the church. 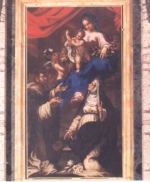 "Madonna del rosario" (sec. XVII)Realized by an unknown painter, probably influenced by the classicism bolognese and from the job of the shop of Francesco Albani. The actor has succeeded in giving particular relief to the hands and the feet of the saints, that could be a real key of read for a more precise attribution. 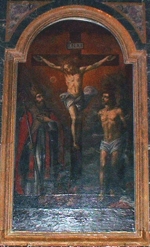 The second altar of right introduces a Crucifixion among St. Nicola from Bari and San Sebastiano. The painting also recalling seventeenth-century pictorial ways, you should be a work of the slow Seven hundred. It would not surprise to find writs that can attest the work of the Magini in this church. The fisicità and the faces of the two saints postpone to some paintings of the artist fanese as the painting in the Parish one of Isola di Fano or the shovel for the church of Santa Lucia to Piagge. 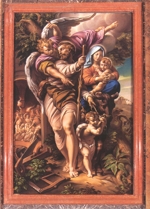 In the other side the second altar has recently seen (1996) replaced the statue of St. Joseph with a painting of Bruno of Arcevia, modern actor manierista, that has played the painting on commission of the priest. It represents the Escape in Egypt, with to the right a south view of Sorbolongo, of which you recognize him the boundaries and the parish one of San Michele, while in low to the left an opening it underlines the motive for the escape: the slaughter of the not guilty ones. The painting is dated and signed in the hilt of the carpenter saw systematized in the foreground to form, together to other utensils, a still-life. The twist of the bodies, above all San Giuseppe, both in the principal scene and in the foreshortening, the strong colors and acids, the use of the cangiantismo, postpones far us to one historical period, the way of the beginning of Six hundred. The neomanierismo developed him during the eighties of the XX° century is a pictorial (to which ago reference also the artist arceviese) movement that he remembers the Renaissance painting and it sets in the fineness of the form and in the precision of the details the explicit content of the messaging that wants to radio.

uno dei santi martiri in pietra dipintaIn two side niches they are preserved two statues in stone painted representing two saints with the palm of the martyrdom in Roman soldier suits. Difficulty to reveal some names, but it is not unlikely that one of the two statues San Maurizio represents to which is devoted the church of Benedictine origin that is found as soon as out the boundaries of Sorbolongo.

The first altar on the left is embellished by an ancient cloth of the Madonna with child both with the head covered by a silver crown, inserted in a gilded frame sustained by two wood angels in flight.

To remember the nineteenth-century romantic organ systematized above the choir in the controfacciata of the church: his/her brothers' work Martinelli, of Fratta of Perugia (today Umbertide) of the second halves the XIX sec, appears today needy of a ready restauration.

On the left side of the entrance a pleasant wooden crucifix can be admired, while where in origin the baptismal source a small gate was found it gives logging to a saletta that stores other pictorial works coming from the preceding building of cult. Among these a "St. Michael that kills the demon" and a "Sant'Emidio" that it brings among the hands the castle of Sorbolongo, both seventeenth-century works. Particularly succeeded the portrait of a Philippine Oratoriano, of which however identity is ignored. 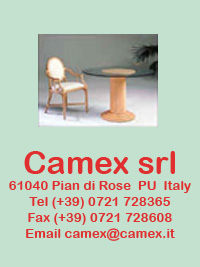