The monastery of San Maurizio

The monastery of San Maurizio

Il monastero di San MaurizioIt is a Benedictine conventual complex that is found near the fraction of Sorbolongo, out of the boundaries, on the secondary road that conducts to the cemetery of the country. The monastery was founded in the years around Thousand and fù one of the most important Benedictine centers in the area, having the follow-up of Reforzate, Sorbolongo and Villa del Monte.

The tradition wants the complex to have been built on the vestigias of a pagan temple. This first religious building was replaced then by the actual one, probably among the XIV century and the XV. The first concerning writs San Maurizio they go up again to 1113, when a bead of Pope Pasquale II linked him/it to the monastery of San Lorenzo. Other beads of 1153 and 1187 remember the existence of it. Subsequently the monastery was suppressed and its erect church to the role of parish to the dependences of the parish of Sant'lppolito within the diocese of Fossombrone. In the examination 1736 censuale the parish of San Maurizio resulted to count 166 souls.

affresco (sec XV/XVI)Few years ago, during a storm, in the church it is fallen a thin partition that hided a small niche completely.

particolare del volto dell'angeloThe fresco of thin actor to today unknown it represents an Annunciation probably played between the end of Four hundred and the first years of Five hundred. The work is divided in two parties: the tall party represents the Spirit Saint surrounded by two groups of faithful oranti; the low party the real annunciazione, where the angel and the Madonna assume a noteworthy relief in comparison to the architecture and to the figure of the eternal Father. The fresco unhides an interesting compresenza of slow-Gothic and Renaissance pictorial schemes. Further investigations on the in-house walls have brought to the light you fragment of frescos, coevi to that discovery in the niche, that the presence of a whole pictorial cycle that he/she decorated the whole building testify. Currently the monastery, of private proprietorship, it is found under very precarious structural conditions, and it is waiting for restauration. 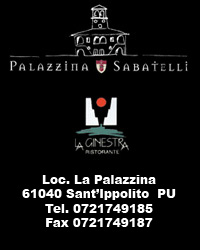